Behind The Scenes: In order to launch the new colours that would soon be added to our range of multiway dresses the new colours photoshoot was planned 6 weeks in advance and so all fingers were crossed for a warm, dry day with some nice white cloud cover to diffuse the light and create the perfect conditions for our photographers. We did however have a loose plan B just in case the Great British summer decided to make an appearance and it turned out to be wet on the day. With so many people involved and the venue booked out for so many dates for weddings it wasn’t going to be possible to cancel, postpone or rearrange the shoot for another time so we were going to have to do the shoot no matter what the weather decided to do. 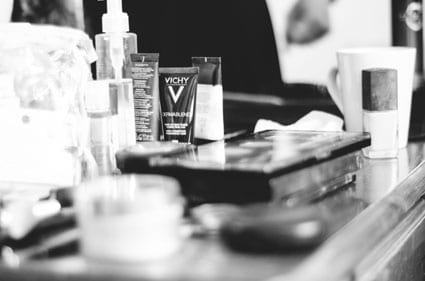 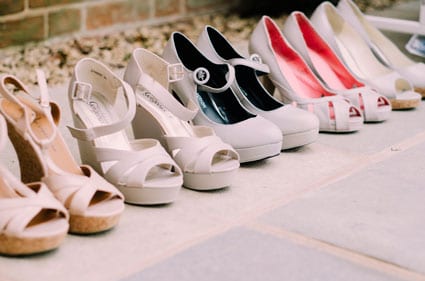 Unbelievably in the days leading up to the shoot we were basking in gorgeous sunshine with temperatures in the high 20’s and all of a sudden we were facing a whole different set of problems – heat and bright sunshine, the sunshine being the main issue as it’s a photographers nightmare! 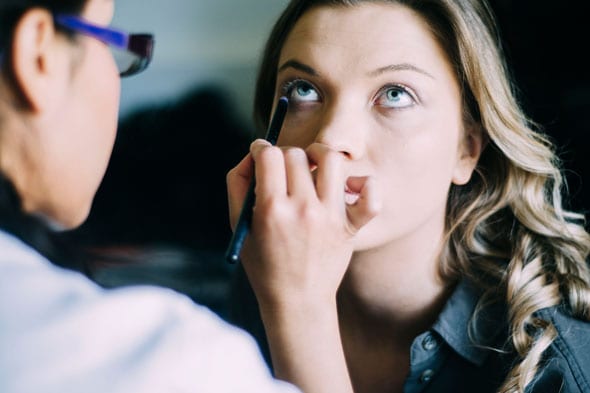 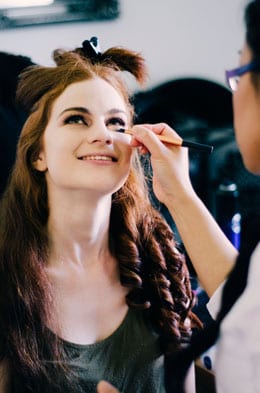 On the morning of the shoot we woke up to a gorgeous summer’s day with a forecast of 30 degrees – a perfect day in every way apart from when your panning on doing a shoot on location in floor length gowns using lots of freshly cut flowers – either way the shoot was happening so I covered up my extremely pale skin with lots of factor 30, wore head to toe white in an effort to try and stay cool, grabbed my sunglasses, jumped in the car full of dresses, shoes, jewellery and props, and headed to Swanton Morley House & Gardens. 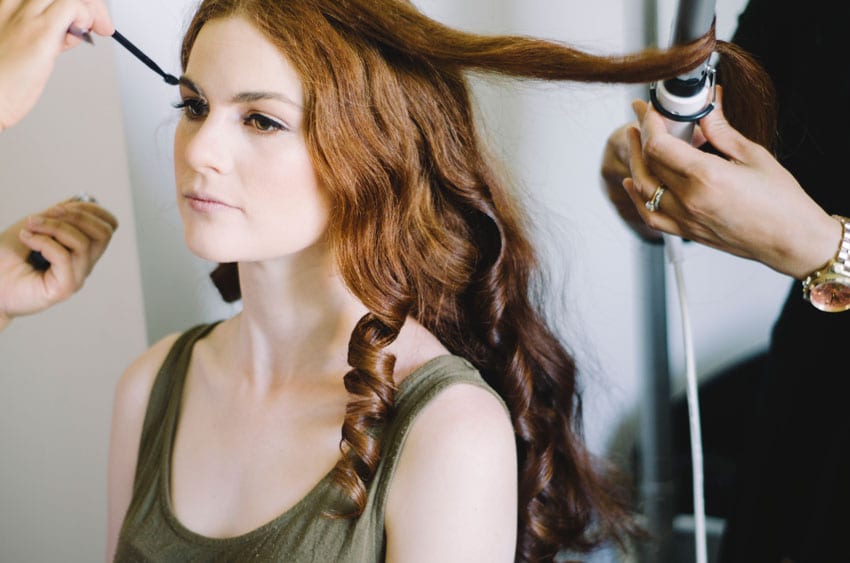 The first thing to do on arrival was to get hair and make-up set up, make introductions, make sure everyone who wanted a cup of tea had one and then get the first models into makeup and hair. 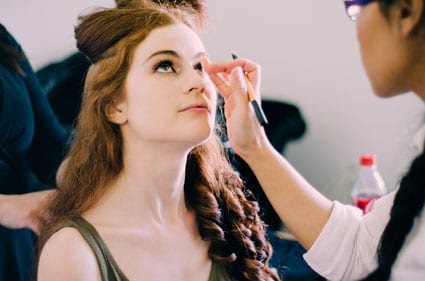 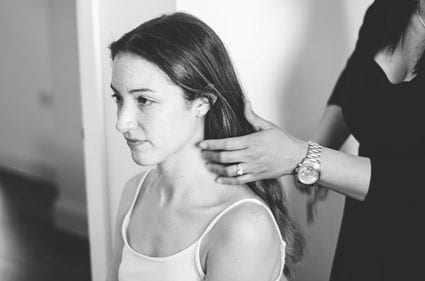 Now, no matter how meticulously you plan a shoot you have to accept before you get going that somethings will not go according to plan and as such you kind of have to plan for the unexpected or at the very least make sure your problem solving skills are super sharp on the day. The new colours shoot in this respect didn’t disappoint and other than the glorious sunshine (poised to create who-knows-what problems for the photographer) I was met by our stylist Kate at the venue who had the news that one of our models was sick. Oh no. This was going to pose a few significant problems – all the stories had been planned around 4 bridesmaid models and consisted of two pairs either with respect to the dress style or the dress colours. 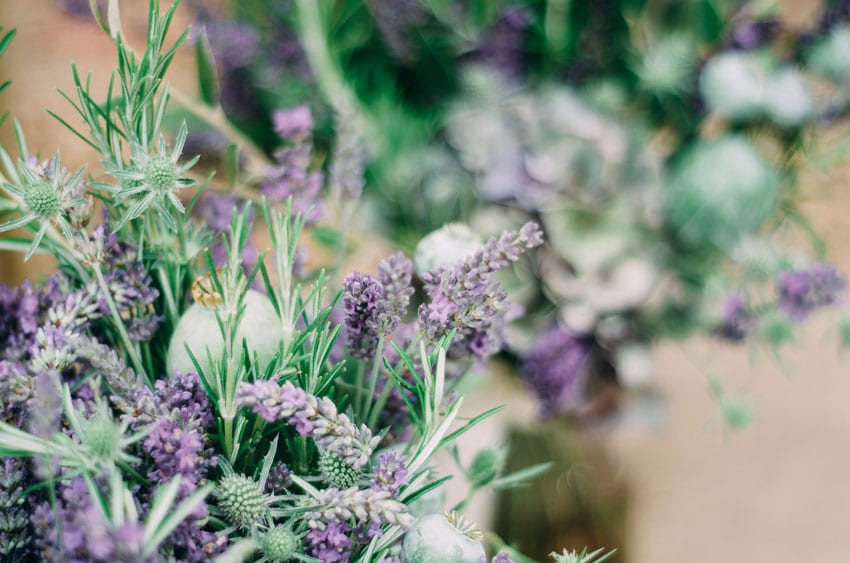 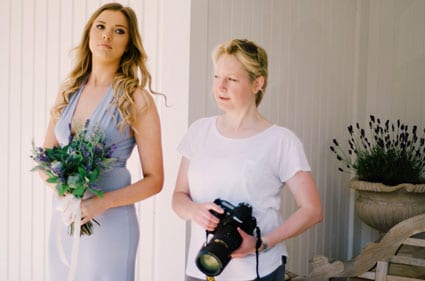 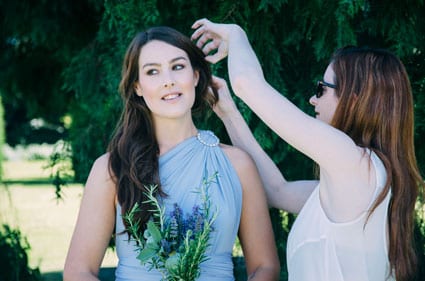 Penny from Crown House Flowers had prepared beautiful lavender bouquets for our bridesmaid models and had also created two different bouquets for our beautiful bride Emma who having got married the week before very kindly agreed to wear her own wedding dress for our shoot. 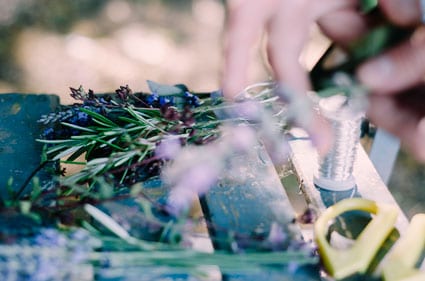 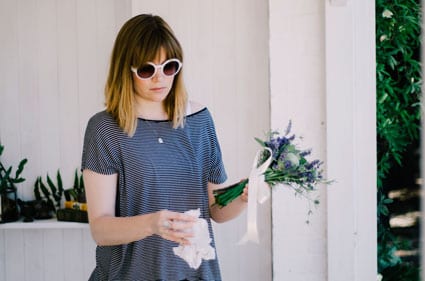 Whilst our models were getting hair and makeup done Caroline of Swanton Morley House and Gardens went back and forth between her two roles of the wedding venue host and our photographer for the day and set up some gorgeous areas for us to shoot in. 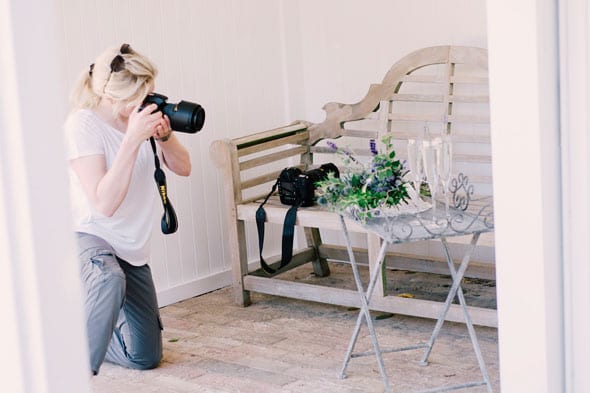 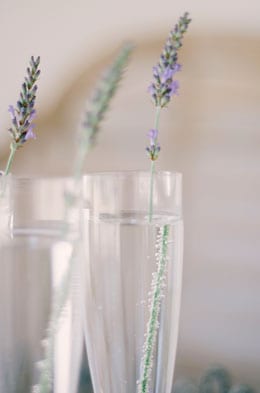 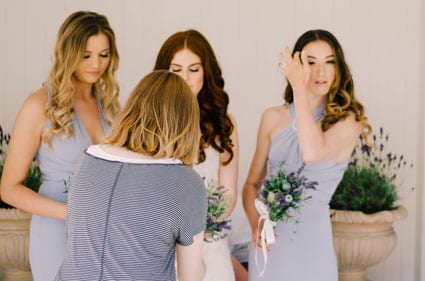 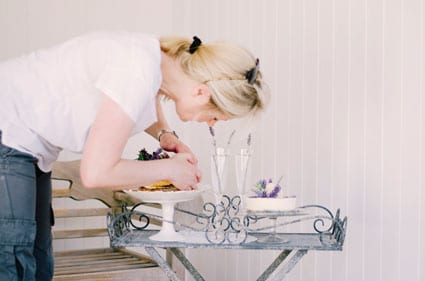 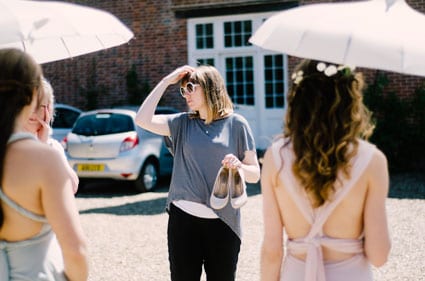 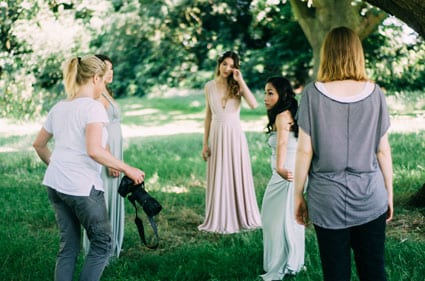 The Enchanted Forest shoot was set up under a gorgeous old tree in the grounds of Swanton Morley House where the sunlight dappled the forest floor. Our models had delicate daisies woven into braids in their hair and crystal accessories to give an ethereal, bohemian feel. 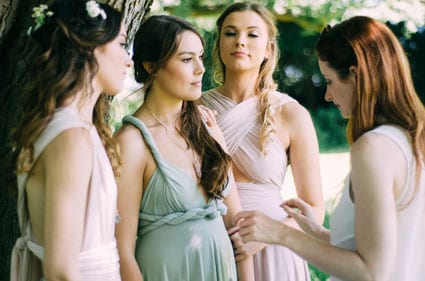 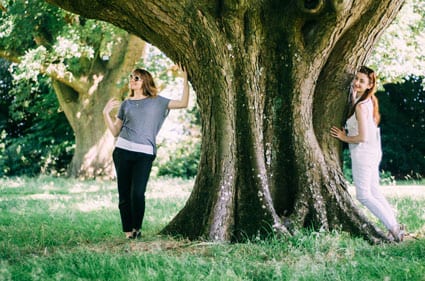 Lanoi stepping in at the last moment to model for us was a great relief but also the source of some amusement as she is a very petite 5’3” whilst our tallest models were both 5’10” without heels and about 6’2” in their heels! Even with the rest of the girls going barefoot and Lanoi balancing in a pair of shoes that were 3 sizes too big and had 4 inch heels there was still a very noticeable height difference! 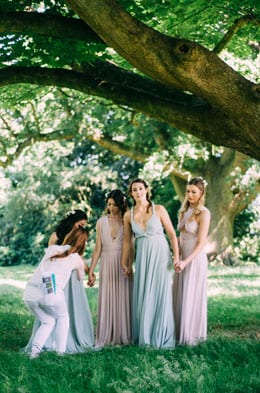 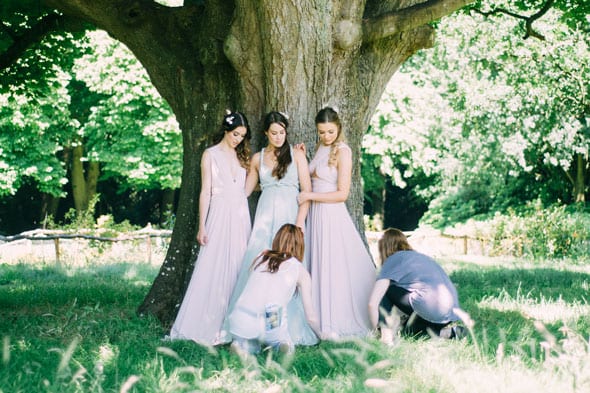 Our final story of the day was Dark Romance which was to be set under a newly built pergola that sits to the side of the building that houses the ceremony room. The pergola was to be heavily decorated by Penny in an abundance of foliage and hydrangea blooms from the gardens but as the day had gone on it became clear that because of the baking heat even the hardiest foliage was unable to withstand the temperature and was simply wilting in the sun. 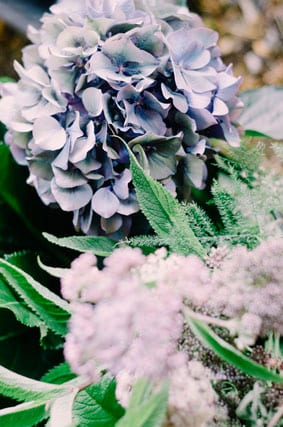 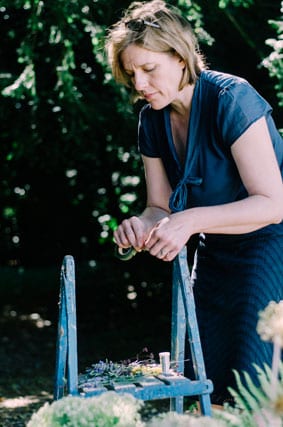 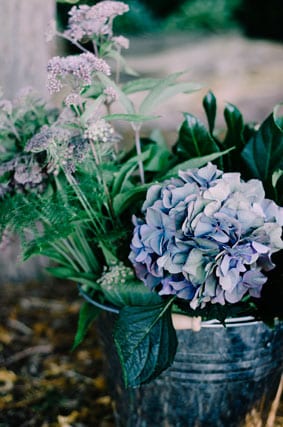 There wasn’t anything to be done about the sun and the heat and in order for the headpieces and the bouquets not to suffer the same fate as the pergola foliage it was decided the best course of action would be to head into the woods where it was cool and where we people could also avoid wilting too. 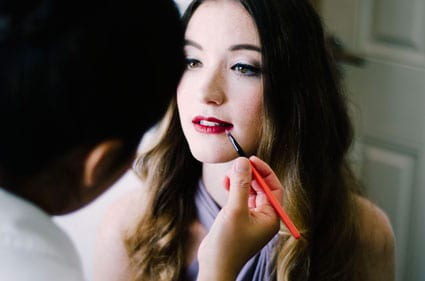 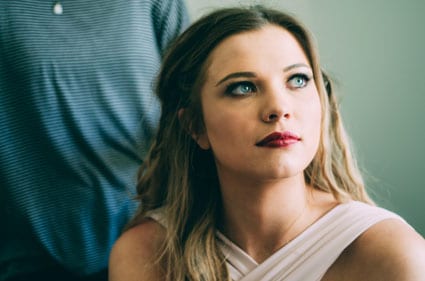 For this more fashion led story we gave out models slightly stronger make up including a dark berry coloured lipstick to create a more of a dramatic look, the soft curls were brushed out into a more tousled wild style to go with the most exquisite floral headpieces that Penny had crafted. 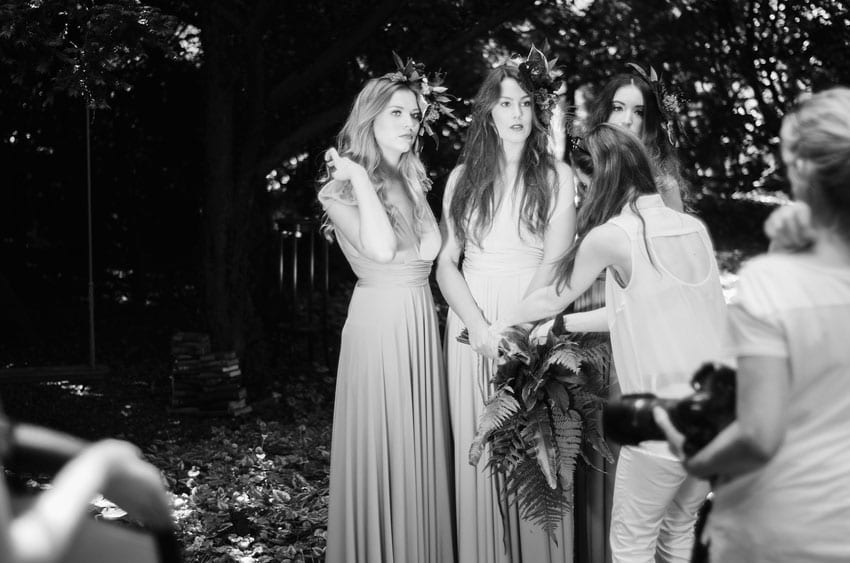